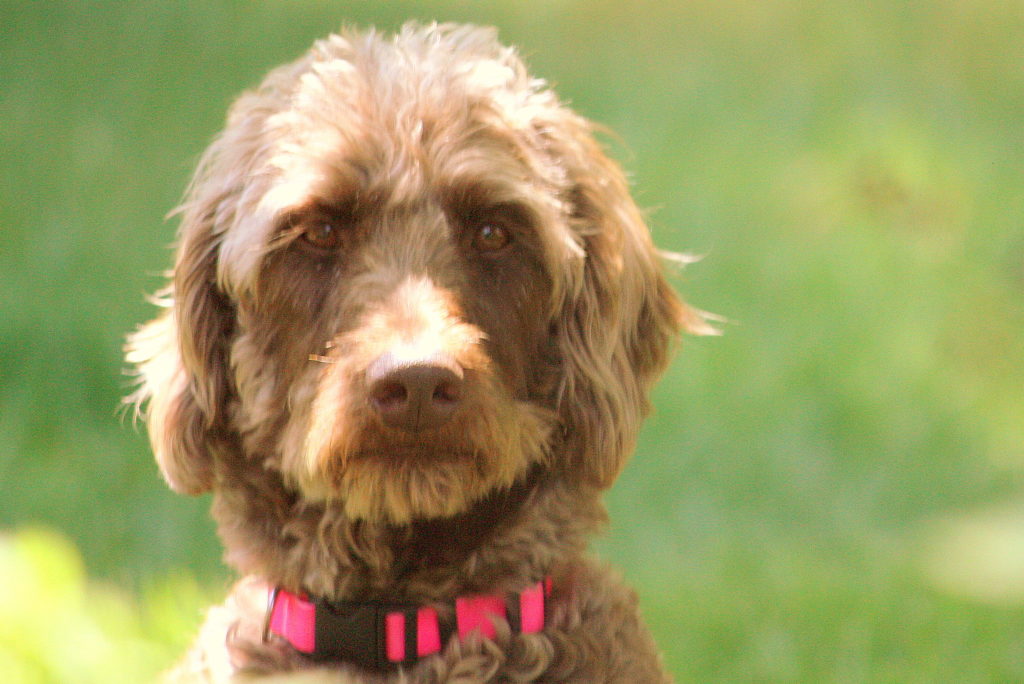 I’m taking my joint custody dog Buster for his morning constitutional when he spots a woman standing in the street waiting for the bus. Being territorial he races towards the woman causing her to emit a loud scream.

Since Buster’s on a leash he fell short of the woman by ten feet. As he wags his tail the woman gives me a look designed to reduce my body into subatomic particles. It doesn’t work.

I smile reassuringly. “It’s only a small dog Miss.”

“I don’t like dogs!” the woman says, stomping away angrily.

“”Take care Miss,” I say, watching as she plods down the street. I can tell she’s preoccupied with something but what that “something” is I have no idea. But if she doesn’t pay attention to her surroundings she’ll get run over by the very bus she’s waiting for. Maybe her emotional state prompted her outsized reaction. Or maybe she really just doesn’t like dogs.

I don’t like people who don’t like dogs. Of course I’ve met people who have good reason to be afraid of dogs – they were mauled as a kid, saw a dog kill something or have serious allergies. On the flip side, however, I have a friend who was bit on the face by a large canine when she was five, had numerous plastic surgeries to repair the damage and still loves dogs. I also know people who are saddened by the fact they’re allergic to man’s best friend but still yearn to own one. Go figure.

But there are people out there who just don’t like dogs. I was perusing a dating website where one of the female respondents wrote, “I just don’t do dogs. It’s a deal breaker.” I feel sorry for any man who dates her. There’s also guy around the corner from my house who yells at me whenever Buster trots past his property. “Keep that dog off my lawn!” he usually yells out his second floor window. His lawn is a disgusting brown patch of dead stuff and his house looks like it hasn’t been painted in years. He’s one of these broken old men who have nothing better to do yell at dog owners and little kids. I don’t like him either.

“When you have a lawn worth protecting then we’ll talk!” I shouted back one day. I won’t be sharing my food with him if Armageddon strikes.

Dogs were the first domesticated animals. The theory goes that prehistoric wolves ate the scraps from garbage piles outside our ancestor’s caves and eventually became used to humans who eventually tamed them. In fact Buster’s great grandfather cubed to the nth degree was called the “Gobi Kitchen Midden Dog” and those 8th Millennium B.C. Chinese eventually breed those scavengers into breeds that would eventually become the Tibetan Spaniel, Pekingese and Japanese Chin. Another offshoot of the “Midden Dog” evolved into the Papillion, Pug, Long Haired Chihuahua and the Shih-Tzu. And those ancient dogs provided a valuable service in return for food – they were natural sentries. Whenever a rival tribesman or saber-toothed tiger was poking around dogs raised the alarm. Freed from always sleeping with one eye open, dogs probably allowed our ancestors to get some shuteye in a time when life was “nasty, brutish and short.” And as dogs became more and more prevalent they were seen as a sign of wealth. So if you had enough food to feed a dog you were probably sitting pretty in your cave condo. And if you were wealthy you’d score those fur-clad babes genetically driven to look for a sugar daddy to protect their offspring. I’m not being sexist or anything – that’s just the way things were back then. But maybe that explains why some girls get all gooey when they see a young guy playing Frisbee with a dog in Central Park.

Buster’s a Japanese Chin. His lineage is noble and ancient. Chins were the pets of Japanese royalty and were probably introduced to the West when Admiral Perry opened trade with Orient back in 1853 with the help of naval gunships and a little ship to shore bombardment. Not fond of being blasted to bits the Japanese gifted Perry with several Chins and they ended up in the hands of President Franklin Pierce and Queen Victoria. Of course the Japanese wised up after Perry’s little visit and began to build up a modern army and navy of their own. Well, we all know how that turned out. After WWII the Chin was almost extinct in Japan. So English and American breeders helped reintroduce the breed to our former enemies. And the Chin is still held in high regard in the Land of the Rising Sun. Whenever I run into Japanese tourists they go nuts when they see Buster and snap a million pictures. And you don’t see too many Chins either. They’re relatively rare.

True to his lineage Buster’s an excellent guard dog. At twelve pounds he can’t take down a burglar like a German Shepherd but you’ll know when one’s coming. If he hears anything out of the ordinary he sounds the alarm. One time he woke me up and I discovered that my apartment was filled with smoke. The house next door was on fire. Thanks Buster.

So why do some people hate dogs? I’ve never understood it. My knee-jerk reaction is that they’re selfish narcissists who can’t be bothered to care for another living thing. Dogs are a commitment and do put a crimp in a fancy free lifestyle so it’s no wonder so many couples get a dog before they embark upon having children. Now I’m not bashing people who don’t get dogs because they lead busy lives. They’re smart. Don’t get a dog if you can’t take care of it. But some people just have an unreasonable antipathy towards dogs and some dipshits abuse them. If it were up to me Michael Vick would be shoveling dogshit for all eternity. That would be some serious Karma. Once I saw an obviously disturbed youth throwing rocks at a dog tied up in a yard. You could have heard me yelling in Connecticut. And one of the biggest warning signs a kid’s an incipient serial killer is that they harm animals. Cops keep an eye on those children as they’re growing up.

Dogs help the blind, rescue people, sniff out drugs and explosives, are actual police officers, provide companionship, retrieve food and have been shown to help reduce depression. They bring joy to old people, teach children responsibility and help politicians get out of jams. (FDR and Nixon) And when the President gets a dog it’s a source of endless media coverage. 43,021,000 American households own 72,114,000 dogs and with pet food, vets, grooming and toys they’re a multibillion-dollar industry employing thousands of people. Dogs overwhelmingly provide more benefits to people than deficits.

So I’m doing the dating game now and my “deal breaker” is a woman who doesn’t like dogs. Yeah, it’s a bit absolutist but trust me, I learned that lesson the hard way. If you don’t “do” dogs I don’t care is you’re a supermodel – you’re gone. And while some people look askance at my joint custody arrangement, to hell with ‘em. They’ll never understand and they’re not worth knowing. Having a dog and taking good care of it is a character reference. And between my ex and me Buster’s one of the best cared for dogs in the Tri-State area.

As the dog-hating woman boards her bus I shake my head. Something bad might be happening in her life and that’s sad.

But then again something is wrong with her anyway.

This article was provided courtesy of the Waiter Rant Blog